Which operas should have beautiful productions?

- January 25, 2011
In the endless debates of regie vs. traditional opera productions, there has been one persistent complaint about regie productions -- that as a rule, they are not as beautiful as "traditional" opera productions. It's unfair to generalize, but regie productions often update the opera to a modern era, or they mix/match periods. Sets are stylized, or explicitly shocking. Stage directions are ... well, often not PG. One of the most beloved features of La Cieca's parterrebox is the weekly "Regie quizzes" in which parterrebox members are invited to guess which opera pictures of a production are taken from. An example of his Regie quiz can be found at the link. 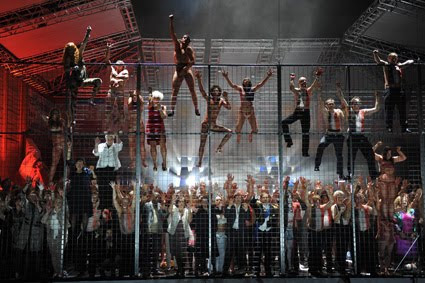 There are valid reasons to prefer one type of opera production to another; what puzzles me is the idea that certain operas need to be "beautiful." I do not think many of the beloved classics were intended to be postcard-beautiful. Rather, they drew from contemporary sources and were intended to shock the audiences. Salome is a classic now, but here is what the critic Henry Krehbiel had to say about it when it premiered in New York in 1907:


A reviewer ought to be equipped with a dual nature, both intellectual and moral, in order to pronounce fully and fairly upon the qualities of the drama by Oscar Wilde and Richard Strauss...He should be an embodied conscience stung into righteous fury by the moral stench with which "Salome" fills the nostrils of humanity, but, though it makes him retch, he should be sufficiently judicial in his temperament calmly to look at the drama in all its aspects and determine whether or not as a whole it is an instructive note on the life and culture of the times and whether or not this exudation from the diseased and polluted will and imagination of the authors marks a real advance in artistic expression, irrespective of its contents or their fitness for dramatic representation.

There is a vast deal of ugly music in "Salome"-music that offends the ear and rasps the nerves like fiddlestrings played on by a course file...What shall be said...when music adorns itself with the loveliest attributes and leads them to the apotheosis of that which is indescribably, yes, inconceivably gross and abominable?

Ok, not a positive review. But the point is, upon closer examination, many famous opera stories are not at all beautiful. They are tragic, and contain themes such as rape (Tosca, Rigoletto, Don Giovanni), torture (Tosca), hired murder (Rigoletto, Un Ballo et Maschera), prostitution (La Traviata), obsessive love and jealousy (Carmen, Otello, Pagliacci), sexual harrassment and abuse of power (Nozze di Figaro), matricide and implied incest (Elektra), and dangerous religious zeal (Don Carlo). All of these themes are presented straightforwardly and explicitly. To make a Normal Rockwell-like Rigoletto would I believe be going against the spirit of the work. The Met's current production of Rigoletto by Otto Schenk is so blandly pretty that one hardly senses that this is a work about rape, revenge, and the corruption of royalty. Hopefully the rumors are true that this production will be retired after this season, and a newer, more thought-provoking production can take its place.

Don't get me wrong -- I think certain operas do call for "prettiness" in the production. To "regie" those productions would actually go against the spirit of the work. On the top of the list is the opera buffa or sentimental comedies that were designed to be nostalgic even when they first premiered. Elisir d'Amore, La Sonnambula, Don Pasquale, La Cenerentola, Il Barbiere di Siviglia are the most well-known of these comedies, in which a silly, sweet world is presented to the audience without irony. In later years Mascagni would try to replicate this sweet, uncomplicated world in L'amico Fritz. These works were meant to be pretty, and I believe that to 'regie' these works is indeed a crime.

Another category of works I think are hard to 'regie' are the deliberate costume dramas, like Lucia di Lammermoor, I Puritani, or Donizetti's Three Queens trilogy, that were deliberately set backwards in a (to the composer) exotic locale and featured lots of women going mad beautifully. I'd categorize Strauss's Der Rosenkavalier as a work that's hard to regie as well -- the sentimentality of a specific era is so engrained in the libretto. Andrea Chenier and Adriana Lecouvreur I'd add also to this list. Can you really regie works that were lavish MGM-type costume dramas before the genre even existed? In those cases, lovely costumes and sets are a part of the experience. Some straight out romances I think have a hard time being 'regied.' Gounod's Romeo et Juliette is one, because it's a sentimentalization of an already sentimental source and La Boheme ia another -- does anyone want to see Boheme as anything but a wonderfully sentimental romance/slice of life? Even updates like Jonathan Larson's Rent are almost sickly in their sentimentality.

The third major category of works that have a hard time being regied in my opinion are the works that deliberately either call for an exotic locale (Aida, Madama Butterfly, Lakme), or touch upon some mythic fairy tale (Magic Flute, Rusalka). I've never been able to enjoy regie Tristans, because, having read the original Gottfried von Strassburg's poem, that work is a medieval fairy tale, and I cannot think of it in a modern allegorical light. Lohengrin and Tannhauser are other works steeped in medieval themes, and although I've longed to stage a Lohengrin that's set as a Western, I feel those operas work best if there's some nod to its medieval origins as well. The particular kind of morality in those operas in my opinion make them hard to update successfully.

But this is a short list. The vast majority of the greatest operas are or should be thought-provoking, even uncomfortable experiences. The emotions and drama they invoke are immediate, and they haven't lost their power or become sentimental and out-dated becuase the issues they touch upon are so raw. To end this on a personal note, the night I saw the Don Carlo premiere at the Met this past fall, I learned that my aunt had lost her long, courageous battle with cancer. I was distraught, and did not feel like staying for the entire opera. But then as I watched the opera, wtih Nicholas Hytner's spare but powerful production, that emphasized the grimness of Inquisition-era Spain, I began to think about my aunt. In the opera, religion is used as a tool to tear apart families. The confrontation between King Philip and the Grand Inquisitor is one of the most chilling scenes of opera. And then I thought about my aunt, equally devout, and how when she passed away all her siblings were there to hold her hand, and she said for one last time that she didn't fear death, and would see everyone in heaven. She wanted death to free her as much as Don Carlo wanted death to free him. As Charles V sang these words:
"Il duolo della terra/Nei chiostro ancor c'insegue;/Solo del cor la guerra /In ciel si calmerà" I wiped away tears. I hoped death brought Don Carlo the inner peace he couldn't achieve in life, and at the same time, I had no doubt that my aunt in a way had finally been freed from the horrible disease that had trapped her body for the last four years.

Did I want a "beautiful" production at that moment? NO. I wanted a production that would make me think about the meaning and value of religion, love, life, and death. A purely "beautiful" Don Carlo is a bad Don Carlo.

To see how much more powerful a less traditionally "pretty" Don Carlo is in the final scene: