Bolshoi's Spartacus over the years

- January 10, 2011
Last night I popped into my DVD player a total impulse buy -- Bolshoi Ballet's 2008 video of Spartacus. I can't believe it but I now have four videos of a ballet I don't even like. I have the 1970 live recording witht the original cast, the 1979 film version, the 1990 live version, and now this video.

Spartacus was for a long time the Bolshoi's calling card. It was choreographed by Yuri Grigorovich to suit "old Bolshoi" style. The story of a slave uprising against the evil Roman Empire played very well to Soviet propaganda. It was a ballet that for a long time only the Bolshoi COULD perform -- a company of 200 dancers, they've always been known for the strength of their males, who could handle both those endlessly repeated cross-stage leap diagonals and what I call the "curtain drape" lifts, where the female is lifted above the male's shoulder and draped over it like a curtain. To complete the look, the females would let their long hair hang down the side of one of Spartacus's shoulder's, and the legs hang down the other side.
﻿


Leap, curtain drape lift, beat chest, that's all Grigorovich demanded of his principal dancers. For the corps de ballet, there's lots of marching with swords and shields for the Romans, and arm flailing and tragic thumping for the slaves. Wash, rinse, repeat, and that's basically the entire ballet. The score by Aram Khatchaturian is as bombastic and repetitive as Grigorovich's choreography. It has one nice tune (the "love theme") that's repeated about 1,560 times before the ballet mercifully comes to an end.


I would show you more, but that's pretty much the whole ballet. Diagonal stage leaping, marching for the corps de ballet, and curtain draping lifts. Wash, rinse, repeat. There's some tragic marching for the slaves, evil marching for the Romans. Crassius the evil Roman gets to look evil, while his mistress Aegina gets to shimmy suggestively. It's far from great ballet, or even good ballet.

But the old videos had a sort of guilty pleasure quality I think because Grigorovich may not have been an inventive choreographer, but he knew the strengths of the company. He knew that what the Bolshoi men might have lacked in refinement they made up for in sheer power -- they were tall, beefy, tough-looking, believable as slaves or Romans. In how many ballet companies do the men really look as masculine as the Bolshoi? Vladimir Vasiliev was the creator of Spartacus and he was so perfect in the role --heroic but not really vulgar. A noble slave. And as Aeginas he had a series of what I'll call the Bolshoi "tough women." Maya Plisetskaya was the first and best of the Bolshoi tough birds, but there were others. They had big hands, steely pointes, taut, hard bodies, and often looked as if they could and would eat your children alive. For Phyrgia, Grigorovich could rely on the more lyrical ballerinas that have always also been a part of the Bolshoi's appeal. Thin, dark-haired, and sad-eyed, they danced Giselle and Les Sylphides and stood out against all the toughies. 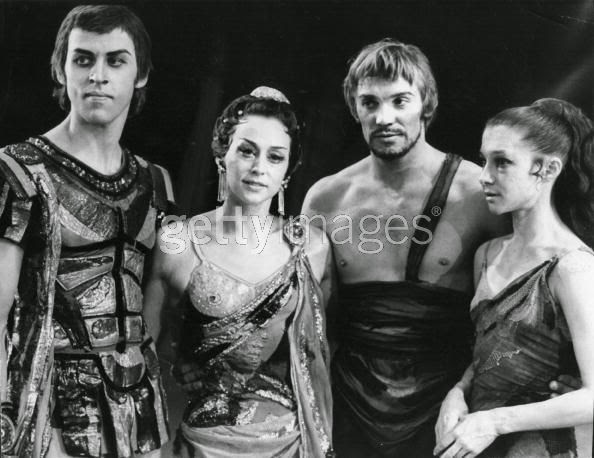 The 2008 video shows that in many ways, the Bolshoi is still the Bolshoi. The men are still effortlessly powerful, and can march across the stage without looking the least bit prissy. But the Bolshoi has also become a much more classical company between the late 1960s and now. They now dance Balanchine, they have recently had reconstructions of Petipa classics like Le Corsaire, Esmeralda, and Coppelia, and the bad old Bolshoi habits (lack of turnout, sickled feet, a certain exaggerated the way the women held their arms, chin and neck that led Edwin Denby to the infamous description "pouter-pigeon") are mostly gone. Nowadays, the Bolshoi women are known for being technically superb dancers who can turn, jump, and balance, but also with turned out feet and elegant arms. Natalia Osipova and Maria Alexandrova are powerful but they're not crude. The corps de ballet the last few times I saw them look wonderful -- elegant, refined, but still have a certain muscular healthy aesthetic to them that I love.

In the video, Nina Kaptsova as Phrygia and Maria Allash as Aegina are "new Bolshoi." Kapstova is lyrical and refined without quite having that hangdog look that Ekaterina Maximova and Natalia Bessmertnova of the 1970s videos perfected. But she looks a bit uncomfortable in the parts where she's basically asked to do a lot of raising her arms in the air, face in agony/ecstasy. She smiles at the wrong times, and can't get that "poor me" look right. I saw her live as Gulnare in Le Corsaire and as Masha in Nutcracker. She absolutely sparkled not only with her dancing but her sense of fun and mischief. There's no fun to be had for Phrgyia. Kaptsova's a lovely lyrical ballerina, she deserves better choreography than to be constantly draped over someone's shoulder. On the other hand, she is able to do the curtain drape beautifully.﻿

Allash and Alexander Volchkov as the "evil couple" are more of a fall-off in terms of appropriateness for the role. Maria Allash wears the wig, she shimmies nicely, but she's more sexy than tough. Volchkov is sweet-faced and more like a corrupt boy-king than an Evil Roman Emperor. They both look too young, too sweet, for this kind of thing. To see what I mean, compare videos. Liepa and Timofeyeva were old-school Bolshoi. In 1990, Bilova was still one of the long line of those tough Bolshoi ballerinas, and Vetrov strong, beefy, brutish. Volchkov and Allash seem like little kids who wandered in from Coppelia in comparison. At one point in the video, Allash is asked to basically wiggle her hips suggestively, and spread her legs before getting hauled around in a series of "sexy" lifts. She giggles self-consciously and it ruins the moment.

For the 2008 video, the Bolshoi imported Cuban superstar Carlos Acosta to be the Spartacus. He has an explosive style, and (this is trickier), he's also African-Cuban among a sea of lily-white ballet dancers. (The Bolshoi still uses horrifying brown-face in this ballet, for no discernable reason.) The video thus has an added weight. He also clearly relishes the challenge of dancing something new (he's now principal at the Royal Ballet). How eagerly he throws himself into the diagonal leaps! The curtain draping lifts are effortless too.﻿ But his facial expressions are hammy, and the repetitiveness of the choreography is more exposed than ever. He gets the steps, even the heroic, explosive persona, but he doesn't have the total conviction that the old-school Bolshoi stars had. Blu-Ray, with its increased detail, doesn't help the ballet -- the closeups emphasize the sweatiness and effort in a way that the old grainy films didn't. For once, why is Aegina wearing a gold costume that "fake-exposes" her nipples? 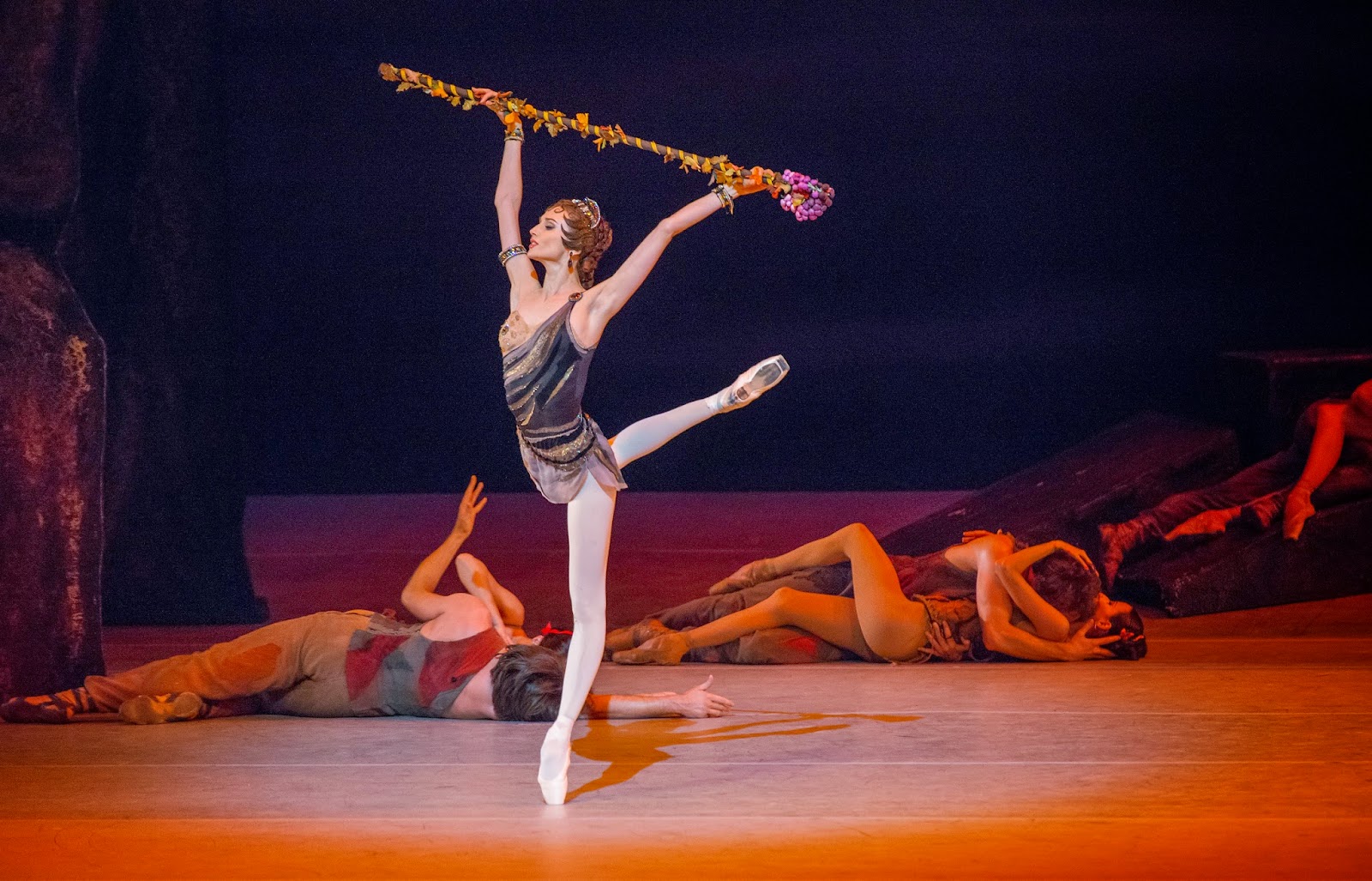 After I watched this video I wondered if it's time the Bolshoi give Spartacus a rest? Overall I think they're an incredibly strong company now. They can dance anything. They've outgrown the leaping, chest-thumping, Soviet Superman/Superwoman stuff. Why continue to dance this stulifying propaganda piece?
ballet Bolshoi Ballet Grigorovich video review Youtube