Libretto says: A room in Violetta’s house. Violetta is seated on a sofa talking to the Doctor and some other friends, who come and go. Some of the guests turn to meet a group of new arrivals, amongst whom are the baron and Flora, on the arm of the Marquis.

Zeffirelli's production: A room in Violetta's house, he's got that part right. The room is in the Zeffirelli style of being extremely large, with fancy furniture. The party, however, seems to be a run of the mill party, without any of the seediness that I'd imagine a real demimonde party might have. Later on in the production Angela Gheorghiu started the scene by making out with the Baron as the guests came in. But I think the Zeffirelli production makes a fatal mistake in Act One when he doesn't really differentiate Violetta's party from any drawing room gathering in the 1800s. It's a little too pretty. Strangely, not much is made of the business of Violetta giving Alfredo a camelia. 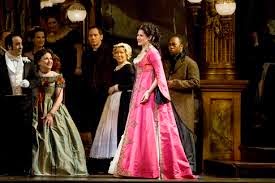 Decker's production: Violetta actually is seated with a Doctor Grenvil on the side, and as the guests arrive, she reluctantly kicks on her red pumps, puts a camelia in her hair, and then the party begins. Even though the guests are in modern dress, the party resembles what I imagine a demi-monde party to have been like -- drunk, seedy, filled with empty "pleasure."

Violetta in this production is very clearly drunk, and she drinks throughout the party. This is actually more consistent with what we know about Marie Duplessis, who vacillated between desperate trips to doctors and reckless partying as she got sicker. Much more emphasis is made about the white camelia that Violetta gives Alfredo.
Violetta's "Ah forse lui/Sempre libera" are fairly conventionally staged, with her throwing champagne before "Sempre libera."

Libretto says: A country house near Paris. A ground floor room. Germont comments later on that "you live luxuriously."

Zeffirelli's production: Actually I think Act Two Scene One is the scene Zeffirelli gets right. The house is a house in the country, but there's expensive china and furniture, and so it's obvious why Violetta and Germont are having financial issues -- clearly neither one knows about money management. And it follows the stage directions more explicitly. In the beginning, Alfredo is alone, Violetta is in Paris, and when Violetta and Germont have their confrontation, the scene has the Victorian, priggish, passive-aggressive tone that feels instinctively right. Decker's production: Luxury is suggested by a series of expensive camelia-printed coverings for the couches, and a camelia drape covers the clock. Time has stopped in this love nest, and Decker has Violetta be onstage duirng Alfredo's two arias, as the two lovers snuggle and play like children. But when Germont arrives, Decker's setup becomes a bit more problematic -- the modern look goes against Germont's priggish, Victorian schpiel (God gave me a daughter As pure as an angel). Violetta tearing off the camelia covers for the couch is a bit heavyhanded in its symbolism. Strangely, Decker chose to have red camelias covering the couch -- wouldn't they be white camelias? Violetta's shop is definitely open to Alfredo.

This production also has Germont and Alfredo interact a lot more than usual. When Alfredo refuses to listen to Germont's command to forget Violetta, Germont slaps his son. The violence between Germont and Alfredo that marks the end of Decker's Act Two, Scene One is dramatic, but having Germont sing both verses of his cabaletta (maybe the worst music Verdi ever wrote) had me impatient.

Libretto says: A brilliantly lighted, richly furnished room in Flora’s house. A door at the back and one on each side. Downstage right is a table where guests are playing cards; on the left another table decked with flowers, where refreshments are set out. There are chairs and a sofa.

Zeffirelli's Production: This is maybe the most infamous scene in Zeffirelli's production. He really goes "all out" and it seems more like a party in Vegas than another midnight demi-monde gathering. He has real dancing cows, real matadors, real gypsies, and the effect detracts from what is supposed to be the emotional high-point of the evening. What's more, there should be a real parallel between Act One and Act Two, Scene Two. Violetta is returning to her old life. I think a good stage director should make the two scenes somewhat similar in feel, but Zeffiirelli makes Act Two, Scene Two way too lavish compared to Act One. It is REALLY up to Violetta in this production to make an emotional impact in this scene. Angela Gheorghiu did so by planting herself squarely downstage center the minute she arrived.

Decker's production: The production also has dancing cows (the men at the party are wearing masks), but the party becomes a nightmare for Alfredo. It's a very uncomfortable viewing experience. The men and women in masks seem to mock him, and at one point a male dresses up like Violetta in the red dress. The clock is moved to center stage and turned into a gaming table, and the confrontation between Violetta and Alfredo is extremely ugly. Violetta lies on the clock/gaming table as Alfredo stuffs bills up her cleavage, crotch, and in her mouth. It's very dramatic, but with an actor as naturally gracious as Polenzani he just seemed uncomfortable with the stage business and it came across as overwrought. The romantic chemistry between Netrebko and Villazon in the DVD softened this scene because their chemistry made it seem like an intense lovers' quarrel, rather than a truly ugly act.

Libretto says: Violetta’s bedroom. Violetta is asleep on the bed; Annina, seated near the fireplace, is dozing.

Zeffirelli's production - Back in Violetta's bedroom. The bedroom is large, but ironically again underlines the idea that even when things are desperate, Violetta desperately needs money management skills. Zeffirelli, however, wouldn't be Zeffirelli without the use of the stage elevator, so in the middle of the Act, he has Violetta get up, run down the stairs, and expire in her ballroom. I saw Renee Fleming sprint daintily down the stairs, which completely ruined the illusion of a dying woman. Gheorghiu, a woman of much more powerful dramatic instincts, lurched and stumbled down the stairs. Zeffirelli's production, however, does make the ending of La Traviata more romantic.

Decker's production - a much grimmer affair. The stage is now completely bare, except for some red on the floor that could be a symbol of coughing up blood. Dr. Grenvil, Alfredo, Germont, and Violetta are all there, but they seem strangely disconnected from each other. Violetta after all was dying of a highly contagious disease, and the way people want to keep their distance from Violetta even as they try to comfort her is very realistic in terms of how people actually act around truly sick people. Violetta is wearing her white slip plus a black robe that suggests the awful, dehumanizing hospital gowns. But Decker's production is different with different sopranos. Netrebko and Villazon had great chemistry and so the scene was much more comforting. Poplavskaya and Polenzani touched each other gingerly and awkwardly, as if Alfredo himself were a bit scared of someone with a highly contagious disease. Strangely, in a production where even the second verse of Germont's cabaletta is uncut, the final "she's dead" line is cut after "La gioia." Violetta expires in a heap, center stage.

Neither production is perfect, both have their problems, and neither of them follow the libretto to the letter. I do think that scene by scene, Decker's production is more thought-provoking, and also captures the ugly, unseemly side of the demi-monde world much bettter than Zefferelli. But as I saw Zeffirelli's production with three different sopranos, and I've seen Netrebko on DVD and Poplavskaya live in the Decker production, I firmly believe that La Traviata is what the singers make of it. A production is there in the background, but La Traviata is sucessful because it is so heavily dependent on the singers. One hears of a "great Violetta" and immediately rushes to the theater, because no two great Violettas are ever alike.
Metropolitan Opera