Zeffirelli's Phantom of the Traviata

- January 16, 2011
Next up in the La Traviata marathon -- the famous (or infamous) film of La Traviata made by Franco Zeffirelli, and starring Teresa Stratas, Placido Domingo, and Cornell MacNeil. This film is praised and scorned in equal parts by opera fans, and it's both an astonishing success and a massive failure.

Franco Zeffirelli in recent years has become synonymous with "old fashioned opera director." His lavish, stubbornly traditional production of La Traviata at the Met was just dropped in favor of Willy Decker's edgy, modern-dress version. To see my thoughts, read here. But having been familiar with the Met staged version, I was still surprised by some of the choices in the film version.

Let's focus on the positives first. For one, Zeffirelli is a skilled film director, and for once an opera film doesn't have the staginess that is so evident in other operatic films. The camera moves fluidly and gracefully in and out of scenes, and there's been a real attempt to "open up" the opera's scenes. (I particularly like the shots of the French countryside -- corny but effectively picturesque, out a Jane Austen film). Most importantly, the always awkward business of singers miming to a pre-recorded soundtrack has been replaced in many scenes by flashbacks and fantasies. In fact, the whole opera is set as a flashback of a dying Violetta. It's a device that works well as a substitute for one close-up after another of singers lip-synching. I also liked *some* of the scenery and sets. Sure, it's over the top, Violetta's house looks more like Miss Havisham's mansion with all the chandeliers and candelabras and huge self-portraits. It looks more appropriate for Phantom of the Opera than La Traviata, but it still made for some striking images. In Act 2 Violetta has rented an expensive manor with an impressive greenhouse, and Flora's party seems to take place in a Vegas casino on New Year's Eve. How else to account for all the streamers? He sets Act 3 back in Violetta's mansion, where she's still lying on exquisitely embroidered pillows. One could quibble about the fact that in Flora's party, there are electric lamps with bright green coverings. And other ridiculousness. And yet in its own overblown Gone With the Wind way, it works, probably because expectations for an opera film are inherently different than for a staged performance.

To give you an idea of what the film looks like: 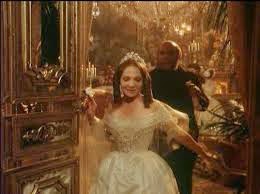 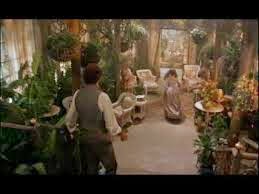 Zeffirelli also drew an impressively dramatic performance from Teresa Stratas. No opera star looked so naturally frail, and the opera is filled with closeups of her frail, fragile face. Stratas is over the top without being hammy. Hers was a face that the camera loved. Since much of the role involves her gesturing silently, I'd call it silent movie acting in the best sense -- not hammy, but affecting and direct. Placido Domingo is wearing a bouffant 'do, and looks a bit too old and mature to play the callow young Alfredo, but he's always been game for following directors, and him holding Stratas as if she were made of paper during "Parigi o cara" was a beautiful moment. Cornell MacNeil also acts very well as Germont -- he's priggish, rude, but basically a good man, and the flashbacks of his daughter getting socially shunned during the Violetta/Germont duet was effective, as was him waiting outside as Alfredo found out about Violetta leaving him.

Now, the negatives of the film. In short, the film is musically a disaster. Zeffirelli disfigures the music with cuts -- not just the bad old cuts (Germont and Alfredo's cabalettas), or cuts that are still in practice (the second verses of "Addio del passato" and "Ah forse lui") but internal cuts all over the place -- "Un di felice" has cuts, the great duet between Violetta and Germont has a huge chunk missing, and most egregiously, in Act 3 we go straight from the prelude to "Addio del passato." None of the scene-setting dialogue is there, including critical lines like Dr. Grenvil telling Annina that Violetta only has hours to live. I'm surprised that conductor James Levine would agree to such cuts, and even more surprised that an artist like Stratas, known for her uncompromising values, would also agree to such a project. To listen to the jarring internal cut made in "Un di felice" and the Violetta/Germont duets:


The sountrack that goes along with the film is also problematic. I know recordings are done in several sessions, with the illusion that everything was seamlessly recorded in order. But this is one recording where it's obvious that the recording was piecemeal, with one aria recorded here, another recorded there, as they often have a completely different recorded sound. Teresa Stratas may once have been vocally able to do the role of Violetta justice, but by 1982 the voice was not willing. Overly veristic effects can't hide the fact that the role is vocally too demanding for her, and her timbre, always less lovely than dramatic, sounds harsh and strained. She transposes "Sempre libera" but goes for the high D in this case, and the effects are not pretty. Elsewhere, she basically lunges at notes she can no longer reach, and at times the voice seems completely drained of color. Placido Domingo on the other hand gives his usual workmanlike, solid performance, although his lack of real warmth in the middle registers was always a problem. Cornell MacNeil is another singer who looks the part but no longer has much voice to speak of.

It's ironic that Franco Zeffirelli has now become synonymous with "old school" in opera direction, because I can see how he was considered revolutionary back in the day. Instead of painted backdrops and barebones props he insisted on film-like three-dimensional sets and detailed acting. He was always maybe more comfortable in the film medium, as film is a genre that sometimes demands an over-the-top visual opulence. La Traviata is a very beautiful film. But as a filmed opera, it fails, because of the musical choices, and the less-than-appropriate voices. If you want to see just the story, better to stick with Garbo's Camille.
opera video review