- January 27, 2011
My video marathon of La Traviata continues with the blu-ray release of the now-legendary La Traviata starring Anna Netrebko and Rolando Villazon at the Salzburg Festival in 2005. I've already written plenty about the Willy Decker production here and here, so I'll just focus on the vocal performances by Netrebko and Villazon in this post.

This performance of La Traviata is already an instant classic, and not just because the Decker production is by turns beautiful, inventive, provocative, and haunting. This Traviata captured the brief time when Anna Netrebko and Rolando Villazon were the It Couple of the opera world, and is probably the one Traviata video I'd take to a desert island, if forced to choose. (My other favorite is the Gheorghiu Covent Garden video.)

Anna Netrebko was/is an unusual Violetta. Her voice is dark, large, hearty-sounding, and she conveys strength and confidence more than fragility and sickness. Thus her Violetta has a palpable defiance against death, as she rushed about the stage, in her gorgeous red cocktail dress, almost as if to say, "See? I'm still alive." Her wavy dark hair, sloping shoulders, curvaceous yet petite pre-baby body, cherry lips, round cheeks, and big eyes make her both uber-glamorous and unbelievable as a woman who's on her way out. When I saw Marina Poplavskaya do the role in New York she made the Traviata almost all about dying, by coughing, lurching and lunging her way through the set. Poplavskaya's gaunt, pale face and thin, angular body made her look much more convincingly sick, but at the same time she lacked the warmth Netrebko exudes. Decker's production has plenty of stage directions, but with its timeless, mythic look, it also allows for each Violetta to put her own personal stamp on the role. Anna is not a great tragedienne. She's too inherently sunny and vivacious for high tragedy. But her Violetta has an uplifting sensuality and vitality that in its own way is very touching.

Vocally she might have been at her peak in 2005. Purists always sniff that her coloratura is labored, and for "Sempre libera," the runs are a bit smudged. I don't care that much about a Violetta who can't sing all the notes of "Sempre libera," since many can't, and many who can sing "Sempre libera" perfectly get the rest of the opera wrong (Joan Sutherland comes to mind). What is more bothersome about Anna's performance (to me, at least) is that she's so intent on pouring out her large, dark sound out, that her Violetta lacks some of the delicacy and shading that would make her Violetta more believable as a dying woman. One can admire her straightforward, unaffected delivery of the music while wishing that she did employ some more traditional Violetta vocal effects.* In "Addio del passato" for instance don't expect her to do the traditional gasping and reduction of the voice down to a thread.** Her diction is not pointed, and she dipthongs her vowels to achieve that round, pure legato sound that Joan Sutherland was also fond of creating. Lots of Violettas have had dark, rich voices, and I know comparisons are odious, but notice how much more, say, Callas is able to make of the line "Ah quell' amor ch'e palpito" or words like "misterioso" in the Act 1 scena. Netrebko's Violetta is nevertheless an intepretation I wouldn't want to be without. Just to hear her swell her voice up to a thrilling crescendo at the final "Oh gioia" at the end of the opera, eyes blazing, as if Violetta was possessed, is worth the price of admission.


Alfredo is traditionally a role that many A-list tenors graduate out of when they become famous, because they think it's not a rewarding enough role. The Salzburg Traviatas thus have the bonus of Rolando Villazon in his brief prime. If Netrebko sometimes seems like she's luxuriating in the sound of her own voice, Villazon is like a hyper-active boy-child, who acts like such a lovesick puppy around Netrebko that some of the more brutal stage business (such as Alfredo throwing money into Violetta's face and crotch) is softened by the fact that this is clearly an Alfredo desperately in love. His eyes at all times are bug-eyed in their intensity. Villazon was a lovely lyric tenor in his prime, his voice having both the sweetness of  Carreras with the dark coloring of Domingo. But even in 2005, you can hear hints of the strain that would later become so prominent as he descended into what can only be called a vocal meltdown. He pushes his voice relentlessly in this lyric part and has a very open attack on his top notes that recall Giuseppe di Stefano, another tenor who burned out his voice quickly. Listen to how similar their approach is in the "money scene."***

The chemistry between Netrebko and Villazon really makes this video special. I've never seen a Traviata pairing, onstage or on video, who are as truly madly deeply in love. (They were lovers offstage as well, and this was the subject of much gossip in opera circles.) In Act One, Decker is the director that makes most out of the crucial stage business of Violetta giving Alfredo a white camelia. Netrebko and Villazon really seem as if they are engaged in a highly charged mating game when the flower is given. They also made the cuddling and kissing in the beginning of Act 2 seem natural, spontaneous, a natural result of two people in that "can't keep my hands off you" stage of love. In contrast, Poplavksaya and Polenzani at the Met this year the moment was awkward because while both Poplavskaya and Polenzani followed stage directions, they don't have much romantic chemistry. When Anna sings "Amami Alfredo" it's like peering in on a deeply personal moment.


Thomas Hampson is Germont. This is a role that really suits him dramatically -- he projects practically no warmth or charm, and the priggishness of Germont seems to come naturally to Hampson. He gets to sing both "Di provenza" and his cabaletta, "Dunque invano trovato." He does so with that dry, arch delivery that by now have become massively irritating. I once read somewhere that Hampson now exemplifies the Bayreuth bark and I have to agree. Decker's conception of Germont is that of cold, prudish man, and he slaps his son and treats Violetta coldly throughout the opera. Since 2005, Hampson's voice has gotten even drier and colder (I heard him as Germont last year). Here he is in the Act Two duet with Violetta.

Carlo Rizzi's conducting is fast, propulsive, and keeps to the theme that time is literally running out for Violetta. I thought there were moments that could have used more sensitivity, such as "Dite alla giovine." The chorus sounds wonderful, and they also do a wonderful job following Decker's demanding directions to seem sinister, voyeuristic, and debased.

There are lots of memorable, striking images from this production. Notice how the white camelia is prominently displayed as a corsage on Violetta's dress.
﻿﻿﻿ 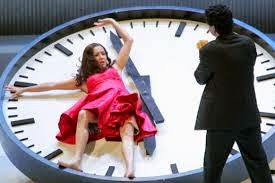 This video not only captures a very special production, but a very special Violetta/Alfredo pairing. The blu-ray image is gorgeous, really much better than DVD, and shows in exquisite detail things like the embroidered flower pattern that's woven into Violetta's red dress in a way I hadn't noticed on regular DVD before. There's bonus footage of rehearsals where one can see that Villazon's manic, hyperactive stage personality is true of him offstage. Netrebko on the other hand seems to have a rather indifferent attitude towards getting "into character." You can see the way they flirt offstage as well. I can't recommend this dvd highly enough for lovers of Traviata.

** Angela Gheorghiu has turned this Violetta-ism into what some might call an overdone, affected mannerism.

*** di Stefano sang a performance of La Traviata with Callas in the famous Visconti revival at La Scala 1955, but the two stars got into a fight over curtain calls and he cancelled the rest of the run. He was very vocal about saying he did not like singing Alfredo.
Anna Netrebko opera video review